We expected a smaller crowd in Samaipata, and the rain and mud kept away others who may have planned to come.  But one pastor, Freddy from the city of Oruro, traveled over 18 hours by bus to get to this conference.  He is a dear brother I met on my first trip to Bolivia in 2002.  On the way, his bus broke down, and he had to wait for another bus before he could continue his journey through the rain ... so how could I possibly be discouraged about the low attendance when I had such commitment and hunger for guidance and growth in the Word?

Other pastors from the Samaipata region also attended, and we began working through the conference material.

Attendance from the ladies was even more meager, but Rebecca has been a trooper and applied herself diligently with the help of JohnE and Matito (Matias Jr.), her interpreter.  The few ladies attending were eager to learn.

The brothers and sisters aggressively applied the principles taught in their small group times.  They enjoyed working through texts from God’s Word together and have expressed repeatedly their appreciation.

On the first night of the conference, the rains began.  It rained hard all night and throughout the next day.  We went from high 70s to low 50s rather quickly, and the conference building as well as our sleeping quarters do not have heat.  So we were all bundled up while studying God’s Word together, and at the home, we gathered in the kitchen where it is a little warmer.

This last night (Friday night) we experienced three earthquakes in addition to the rain.  After the conference started on Saturday, we experienced a rather large earthquake that shook our meeting hall. This is rather unusual, and the Bolivians were just as surprised as we were.  Being from California, we had to put on a good tough exterior and teach them the “earthquake dance."

Showers have been a little difficult as a result of all the rain.  There is plenty of water, but it is brown -- not the kind of shower that will cleanse the body or the kind of water you want to wash your hands in -- so we are becoming a little more like hippies (need I say more?).

Part of the road from Samaipata was blocked because of the rain, but we decided we would try to return to Santa Cruz immediately after the conference ended.  Since writing the last couple of paragraphs, we have had two more earthquakes, the largest being 4.5.  So I think the attitude is, “After we have done our ministry, let’s get out of Dodge as fast as we can.”

And we did, though we had to wait in a traffic jam for two hours while the road crews worked on the roads.  Fortunately we were only 10 cars back and were able to watch and take pictures of these huge boulders about the size of a garage being tossed around by a bulldozer and other various “Steve Bright” vehicles.  It was really interesting …

We arrived safe and sound in Santa Cruz and had chicken (go figure?) for dinner … and were able to call home, comfort our families, and take a warm, clean shower.

Thanks for your ongoing prayers! God is good! 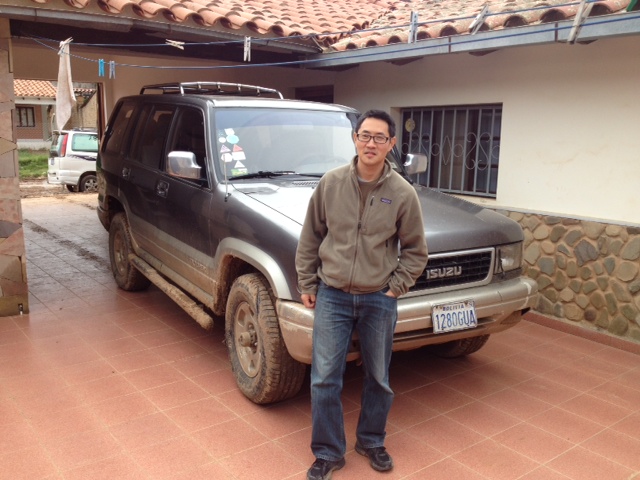 Photo: JohnE, as we were leaving Samaipata 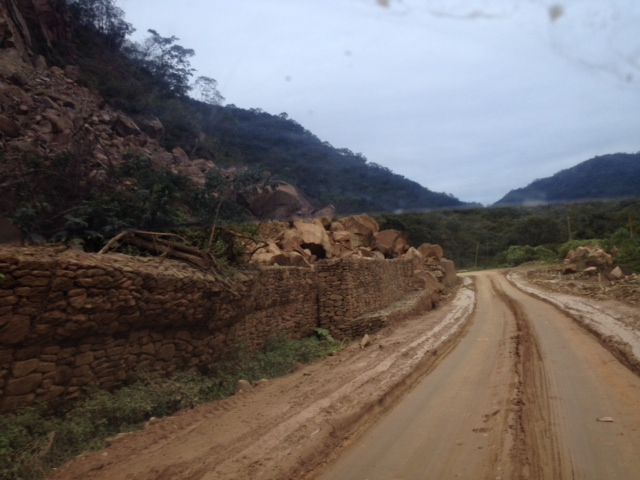 Photo: The road between Samaipata and Santa Cruz 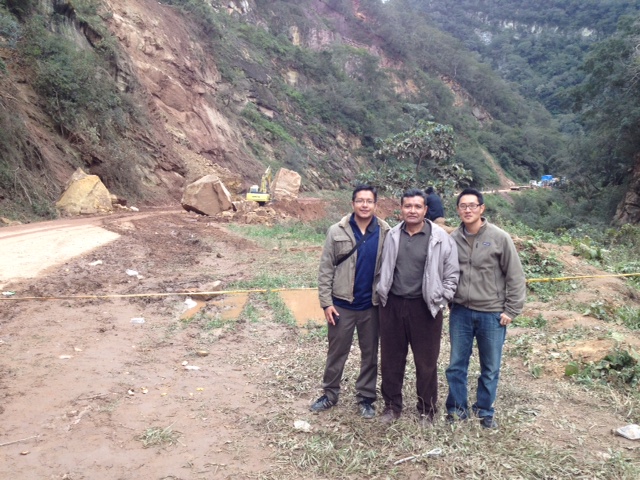 Photo: The men posing with the landslide boulders in the back